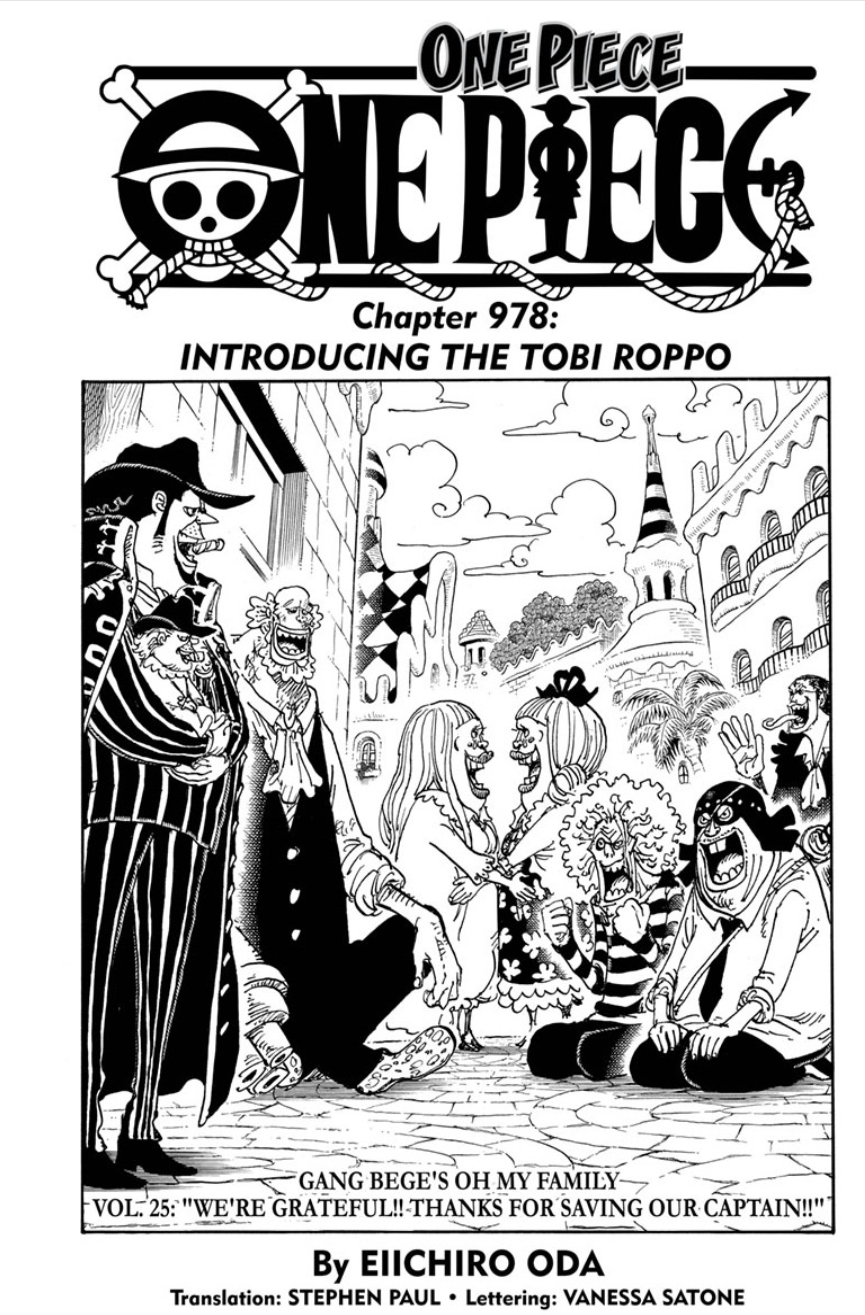 Inside the Polar Tang, Law proceeds to take the Nine Red Scabbards to the rear entrance while the others make their way to Onigashima from the front, with Kin’emon and Denjiro leading the samurai. Denjiro says they should take caution in case they are attacked and Kin’emon asks if he is underestimating all of them. Denjiro replies that if they fail, the past 20 years would have been in vain, but Kin’emon says they will ensure this all ends soon. As they all reach the entrance, Kin’emon sees the enemy partying behind windows and, realizing they aren’t expecting their attack, wonders if Kanjuro delivered his report. Nevertheless, he declares they should attack now. Sanji says Kaido’s mansion is under Onigashima and they should be careful if they are spotted.

Usopp notices some lookouts, who, albeit sloshed, see the ships and he takes them out using Midori Boshi: Nemuri So to knock them out. Jinbe says he understands a majority of the plan, but if they entered with such a large amount of ships in an open area, they will alert the enemy. However, the Straw Hats are surprised when they see the ships the samurai came on begin to sink. Luffy asks what is happening and Kin’emon replies that the samurai will not need them to return. This worries Usopp and Chopper regarding the Thousand Sunny and Jinbe says he will hide the ship while they land on the island. As Brook comments on the determination of the samurai, Kin’emon yells that they can’t falter, because whether they live or die, at least they had the strength to stand up against Kaido.

Chopper then notices several Beasts Pirates appearing across the bridge, but Robin points out at the end of the bridge the samurai are all donning Beasts Pirate outfits. Kid, Killer and their crew are suprised that they are wearing these outfits as well. Kin’emon reveals it is thanks to his powers everyone is looking like a Beasts Pirate and reminds them that they are still outnumbered and they all should make good use of the camouflage given. He also says they will revert back to their previous clothes as soon as they remove their costumes or the outfits are destroyed, so they should avoid as much confrontation as possible until they reach the castle.

One of the Tobiroppo, Ulti, says Queen would be better off dead because he called them jokesters when they didn’t respond to his call. Page One tells her to think about fashion instead and the two argue. Who’s Who asks who would replace Queen if he died. Black Maria asks X Drake if it would be him but he refuses. Sasaki says he would be thankful if he did because that would apply for Page One as well, which irritates him. Ulti yells at Sasaki and tells him to stop screwing around or she’ll kill him herself, and Page One tells her to shut up herself. Who’s Who tells the two of them to be quiet and Black Maria says she likes that Ulti never backs down when challenged. Drake asks why all six of them have been called together and Sasaki says it was an important demand from Kaido, though he believes the outcome is easy to see. Ulti asks if this is a family matter and if Kaido is stupid, much to the shock of the other five who tells her to shut up.