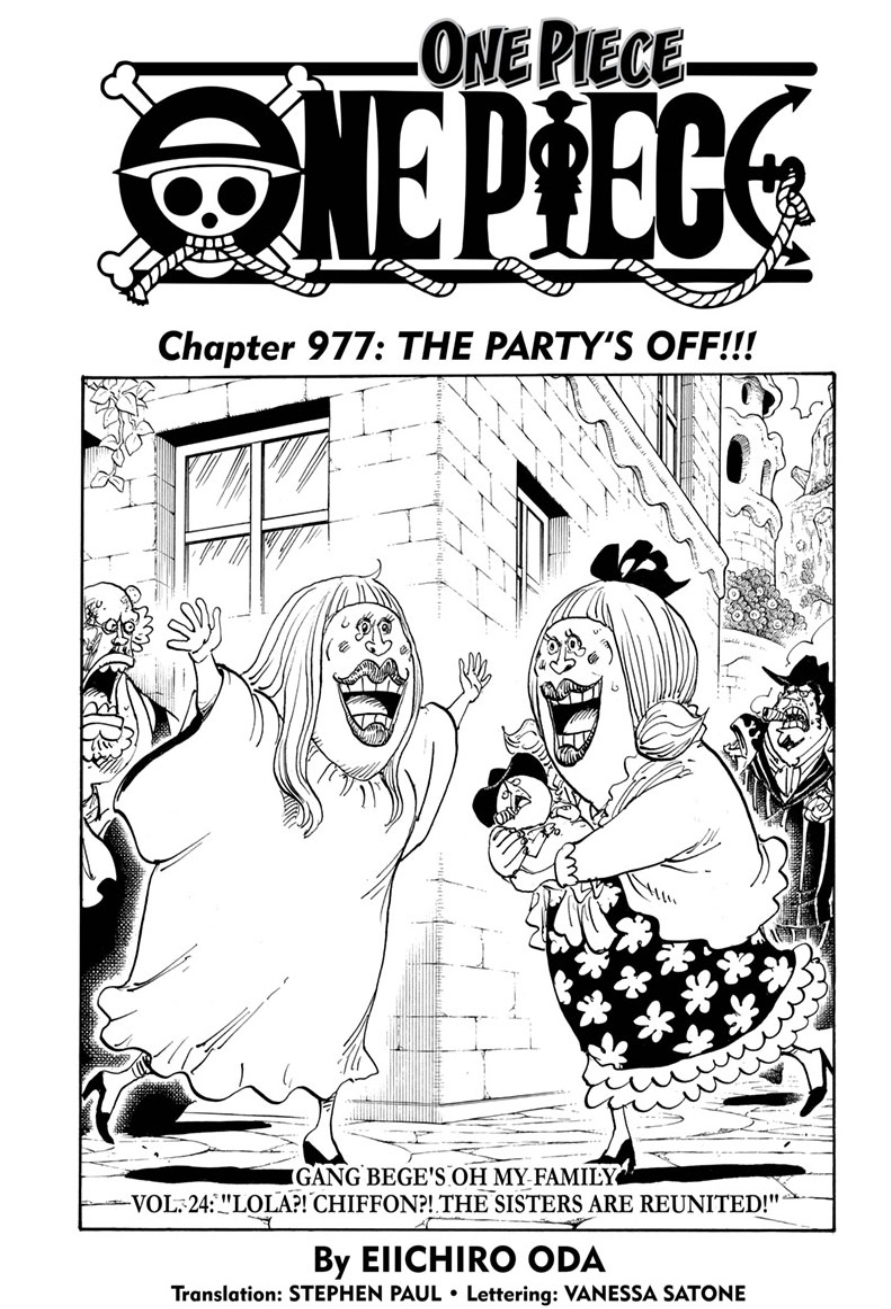 The Straw Hats embrace Jinbe as he reveals he was tending to the injured Sun Pirates and then there was a farewell party that caused him to be late. Usopp expresses amazement that a former member of the Shichibukai is now their crewmate and Robin says it is heartening. Nami and Chopper tell Franky that Jinbe is an amazing helmsman and the cyborg expresses joy that someone can draw out the Thousand Sunny’s true potential. Jinbe asks a question and Franky finishes by asking if he wants a drink. Most of the crew agree while Sanji asks where the alcohol is supposed to come from, and Zoro says he can sense it. Kin’emon yells to the Straw Hats that he wants to coordinate with them once they make it into the island, but they don’t listen and Law tells Kin’emon to forget it because it will be a waste of time.

Shishilian jumps onto the Polar Tang and says he will listen. He says to Inuarashi that because he is a member of the Nine Red Scabbards, he should fight with them and he can lead the Minks, which Inuarashi agrees too. Hyogoro speaks up and says that he will lead the samurai so the Scabbards can fight unhindered. With all that said, Kin’emon goes over his plan: He explains the layout of Onigashima and the front gate, and how inside the giant skull of the mountain is Kaido’s castle. Thanks to the blueprints, they will aim for the rear entrance and split their forces in two, going left and right, to meet up at the rear entrance and ambush Kaido while he’s drunk. Denjiro, believing this plan was the one meant to deceive Kanjuro, asks Kin’emon what his real plan is, leaving the Scabbard captain stumped while Raizo wonders how smart Denjiro really thinks Kin’emon is.

Law jumps in and says that if they assume the enemy knows they are coming, their priority targets are the samurai, Luffy , Eustass Kid, and himself, and no matter how planned out their strategy is, there will always be two idiots who won’t follow and charge at the enemy head on. He decides they should use them as decoys while their troops will split up on the mountain paths, but he also adds they are decoys too. Hyogoro is surprised by this and asks where the Scabbards will go, and he says by sea using his submarine, and that he will use his powers to warp them to the rear entrance after avoiding the whirlpools. Kin’emon thanks Law for his consideration but he feels he should stay back and lead their men. Denjiro asks he too go by the mountain paths because both troops need a commander. Ashura agrees to this so they can save their energy for their fight with Kaido. Kin’emon says they will proceed as planned now and Denjiro praises him for the cautiousness, while Law realizes the Straw Hats are gone.

After hearing an explosion at the front gate, Denjiro realizes he forgot to tell them about the guards stationed there during the Fire Festival, and if they know about the raid, it will be bad. The Scabbards panic at what will happen to the Straw Hats, but are left dumbfounded when the take out the guards with no issue while Usopp, Nami, and Chopper watch from afar. Luffy yells to Kin’emon that they took out the guys at the gate and he tells the troops to make their way to the island. With alcohol somehow in their possession, Luffy prepares to throw a party to celebrate Jinbe’s arrival but immediately puts it on hold for after Kaido, Orochi , and Big Mom are defeated.

Kid yells to Luffy that he won’t let anyone else take down Kaido, because he needs to avenge Killer, who had dawned his mask again. The rest of the Kid Pirates agree, and even laugh the same way as Killer to preserve his feelings. Unwilling to let them get ahead, Luffy tells his crew to catch up to them.

At Onigashima, the Beasts Pirates are shown celebrating and Orochi tries to get close to a geisha. Queen yells for the chefs to bring out oshikuro but his subordinates say they are bringing it to Big Mom, to which he yells he doesn’t care. Kaido yells that he wants his son to show up and his subordinates reply they will find him. He is then informed that the Tobiroppo have arrived and he decides to introduce them to Big Mom, where he learns she is changing into a kimono. The Tobiroppo are seen making their entrance.