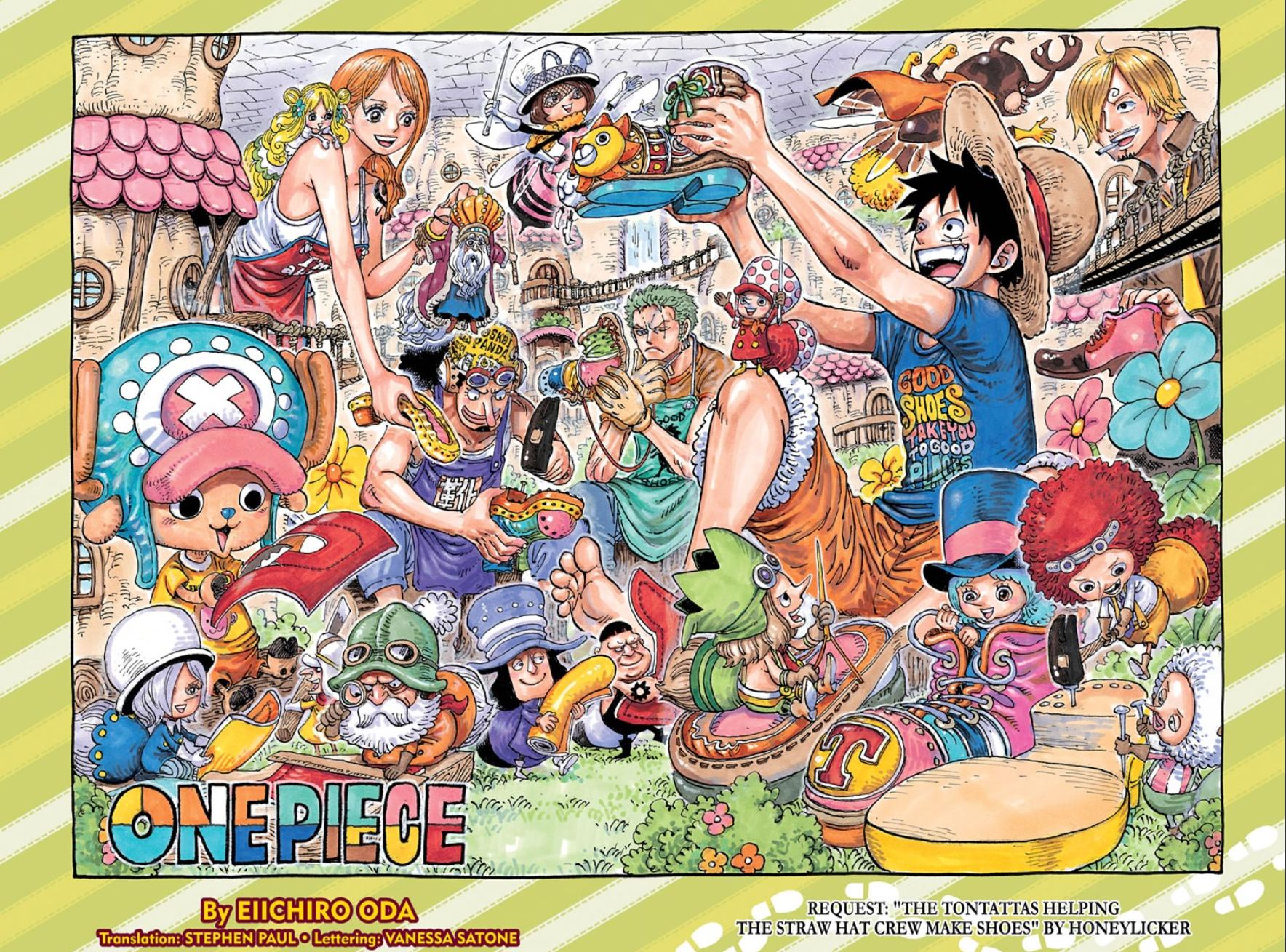 As the Samurai congratulate Kin’emon’s ingenuity, the Scabbards (save for Denjiro) are suspicious and pester him for the truth. He shrugs off this by preparing for a fight with his possible death, as his allies assures him that he won’t fall alone.
Kanjuro decides to retreat and take Momonosuke to Orochi, as Kawamatsu dives into the water to return to the docks. However, Kanjuro holds him back with his brush before he conjures a crane and escapes on its back, claiming that he would find Hiyori and dispose of her, now that he knows she still lives. Kawamatsu is infuriated at this, as is Kin’enmon about Kanjuro using terrible drawings for them in their time together.

On the Sunny, the Straw Hats determine that Kanjuro was the spy and decide to hinder him. Sanji prepares to pursue them through his Sky Walk but Kanjuro creates and shoots out a cloud of ink. With this technique, which Kanjuro calls Ukiyo Yudachi Ezu, a shower of ink rains down on the alliance, striking their allies and the ships. Kanjuro then mocks Oden and Toki’s legacy as well as Momonosuke’s cowardice. Through tears, Momonosuke tells his allies to continue the fight, while he escapes on his own but internally doubts it.

Hearing this, Luffy brings on how Momonosuke is crying (with the Samurai being angered by his audacity) but Luffy promises to save him no matter what. Momonosuke is touched before Kanjuro flies them away to Onigashima. The battle on the seas continue, with the Scabbards regrouping with Shinobu and Denjiro on the Polar Tang. Law is annoyed by them using his ship, as they thank him in spite of his protests.

The Beasts Pirates battleship begins sinking rebel ships with long range cannons, as the Straw Hats decide to advance on it. Everyone on the battlefield realize the disadvantage, although Kid is not concerned. Soon the battleship is sunk, as a voice is heard introducing himself as the newest recruit of the Straw Hat Pirates. It is shown to be none other than Jinbe. Law is shocked by Jinbe’s presence while Kid is shocked to hear that the former Shichibukai has joined Luffy’s crew.

Having reintroduced himself, Jinbe tells Luffy that he kept his word of returning alive to join the raid on Onigashima, with the Straw Hats happy he made it.